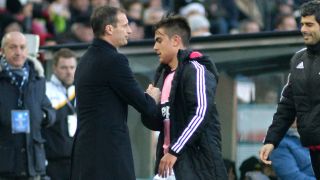 Paulo Dybala has found being compared to Lionel Messi, Cristiano Ronaldo and Neymar "damaging", according to Juventus coach Massimiliano Allegri.

A strong start to the Serie A season, which featured hat-tricks against Sassuolo and Genoa, intensified suggestions Dybala could become the player to break Messi and Ronaldo's decade-long stranglehold on the Ballon d'Or.

Dybala has since gone off the boil, scoring only once in Serie A since October, leading Allegri to regularly leave the Argentina international on the bench.

Allegri again denied he has fallen out with Dybala - reportedly the subject of an offer worth £70million plus Henrikh Mkhitaryan from Manchester United - but hinted the 24-year-old has been distracted by speculation.

"The relationship with him absolutely hasn't changed," Allegri told reporters on Friday. "Dybala came to Juventus three years ago and I think he's grown a lot.

"Juventus put even more emphasis on his qualities and he's given a lot to Juventus. In my opinion, he still has huge margins for improvement.

"The comparisons which were made at the start [of the season] were damaging for Paulo, but fortunately he's a smart lad and he understands you can't compare a lad of 24 to two sacred monsters of football [Messi and Ronaldo], who have won 10 Ballons d'Or.

"Plus there's Neymar who is another that is close. So Paulo has to make his own way and not be compared to any other player. He has his own qualities, he's an extraordinary player. You just have to watch him to see he's different from the others.

"But these comparisons which were made were a bit damaging, these are comparisons which cannot and should not be made, you can't compare a 24-year-old lad to two who have won 10 Ballons d'Or. But in Italy... It's not just Dybala, Dybala is the least of that problem. There are lads who play half an hour and the next day they're worth €40million."

Juventus face Verona in Serie A on Saturday, bringing teenage striker Moise Kean up against his parent club.

"He's doing well at Verona," Allegri said. "He's a lad who was born in 2000 and has important qualities.

"He has to improve technically, so he needs to work but he's understood you need to make sacrifices to reach certain levels. That's an important thing."