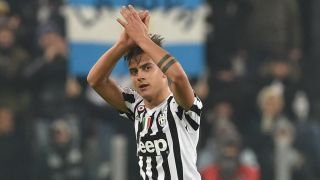 In-form Juventus forward Paulo Dybala says it will be "very hard to match" Lionel Messi amid comparisons with the Barcelona star.

The 22-year-old has voiced his admiration for Messi on more than one occasion, and his fine performances for the Serie A champions this term have even seen him compared by some to his fellow Argentine.

Dybala knows he faces a huge challenge to try and emulate Messi and said he would be satisfied just by getting anywhere near the extraordinary level of the five-time Ballon d'Or winner.

"There are very few players who can reach Messi's level. I am always trying to be myself. I try to keep improving by working hard and by being committed," Dybala told Corriere dello Sport.

"It will be very hard to match Messi if you look at everything he has achieved. But I always look to do my best for the team. That's what I try to do in each game I play.

"I don't really know Messi yet. He was not part of the national team when I was called up.

"It will be very difficult to become like Messi. I would already be happy if I became even just a little bit like him.

"The people in Argentina say that I am a bit like Sergio Aguero because of the way I move."

Dybala, together with Napoli striker Gonzalo Higuain, has been one of the undisputed stars of the Serie A season so far and he is pleased to see another Argentina international doing well as Juve prepare to face Maurizio Sarri's team in the Coppa Italia semi-finals on Wednesday.

"I am enjoying Gonzalo's good run of form because he is my compatriot," the former Palermo man said.

"I admired him when I was called up for the national team. I am aware of what he can achieve and is currently doing. I am happy to see him scoring, but I obviously hope he does not score against us.

"I would not mind having his right foot. The way he turns and shoots, I can learn from that."