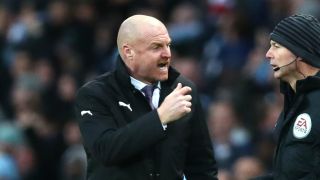 The Clarets led through Ashley Barnes' superb strike before Ilkay Gundogan's fast thinking saw him thread a set-piece through the static visiting defence for Sergio Aguero to score.

Aguero netted again just 93 seconds later before Leroy Sane and Bernardo Silva added late gloss, but Burnley boss Dyche was left to rue what he felt was poor officiating from Scott to allow the free-kick for the equaliser to be taken without a whistle being blown.

"I heavily question a moment that changed the course of the game," said Dyche after his side's third-round exit.

"We had done a good job up until then, not only by scoring a fine goal, but working from our shape and frustrating the opposition.

"We know they have to start to open up and that can leave them open to the counter, but then it gets to a moment where I imagine the rules are probably in the referee's favour.

"I don't think he has to whistle, but at times you have to use common sense and that was such a moment.

"For one, Ashley Westwood is stood in front of the ball questioning the foul and then, four yards away, he is clearly asking the referee if he is going to blow.

"I spoke to the referee afterwards and he said he doesn't need to blow the whistle. I just suggested when you are an experienced referee, you know the difference on that moment and when it leads to as goal I think you can use your experience."