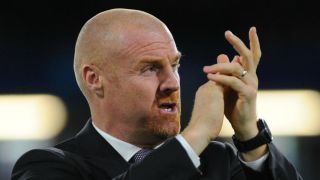 Sean Dyche has no intention of "running away from Burnley" amid links to the vacant managerial position at Leicester City.

Dyche has been touted as a leading candidate to replace Craig Shakespeare at the King Power Stadium, though he this week denied there had been an approach from the Foxes.

Having overseen two promotions at Burnley and kept them in the Premier League last season, the manager has drawn praise for an excellent start to this campaign.

The Clarets sit seventh in the top flight having won away at Chelsea and Everton as well as earning draws when visiting Tottenham and Liverpool.

Dyche was linked with Crystal Palace in the close-season and is flattered by such speculation, but he intends to remain at Turf Moor for the foreseeable future.

"We've been here before. It's nice to be recognised for doing well but it doesn't mean there is any truth in it. There are no guarantees in this job but there's usually a moment of truth," he told The Guardian.

"There will come a time when people want you out or someone at a bigger concern wants you in.

"I'm not running away from Burnley, I've never said I want to move on, but I can't say for definite I wouldn't in the future, because that happens in life. People change jobs."

PREVIEW | Gaffer - "There is nothing in my consideration other than Man City on Saturday".Watch: October 19, 2017

Burnley face another tricky away trip to Manchester City on Saturday, a clash that pits Dyche's pragmatic approach against the slick, attacking style of Pep Guardiola.

"City have looked fantastic, you've got two superpower clubs in Manchester at the moment and they are in front," he said.

"You are up against a collection of some of the best players in Europe. Quite obviously it is a big task but I don't think we should change too much, we have to believe in what we do. And we'll need a bit of luck to go our way, if I'm being honest.

"I have no problem with anyone's view about what we do, I really don't. Very rarely does it stick in my craw what managers or media outlets say about us.

"In this game you can waste a lot of energy wondering about other people's opinions when the one that actually counts is yours. Because that's your job, to lead and to manage.

"Without wanting to sound pompous or clever it is down to me to make decisions on behalf of the side to give it the best chance of being successful."