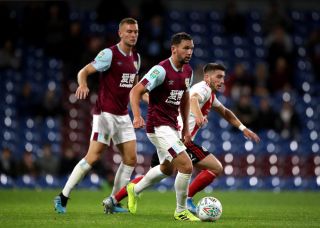 Burnley boss Sean Dyche insists Danny Drinkwater cannot be judged on one performance alone after the midfielder’s error in the 3-1 Carabao Cup defeat to Sunderland at Turf Moor.

Drinkwater joined the club on a season-long loan from Chelsea earlier this month and was handed his first senior start since March 2018, but it proved a debut to forget for the former Leicester man.

In trying to cut out Denver Hume’s innocuous pass, Drinkwater deflected the ball into the path of the unmarked Will Grigg in the area, and the Northern Irishman duly grabbed the lifeline to cancel out Jay Rodriguez’s opener.

Dyche said: “I’m not really going to question Drinky, we know he needs football, he knows he needs football as well. He hasn’t played a lot, he’s getting used to the players around him so that’s a different thing.

“He stuck at it, he’s got through the 90 minutes which is really important. I’m not really judging him in amongst our pack, that’s for sure, not just on one performance.

“He’s tried to be diligent, tried to be honest. It’s not just down to his mistake, we weren’t quite sorted out to stop it, even with a mistake.”

While Dyche retained only Dwight McNeil from the weekend draw at Wolves, his Clarets line-up contained a number of former or current internationals, including Joe Hart, Aaron Lennon and Rodriguez.

Rodriguez marked his first start since rejoining his hometown club over the summer with a calm finish as Burnley largely dominated in the opening 45 minutes, only to be pegged back by Grigg.

Burnley were then caught cold on the resumption, with Tom Flanagan and George Dobson scoring for the Sky Bet League One side within five minutes of the restart.

Dyche added: “That’s a really experienced team we put out there, I should have enough faith in that to get through 95 minutes.

“When you look on paper that’s a strong outfit. We should be taking care of ourselves better than that.

“In the first half I thought we were in complete control in every area other than the mistake. For 35 out of 45 minutes in the second half we just didn’t turn up.”

Sunderland made eight changes to their side though manager Jack Ross was adamant this was not a second-string outfit, and he admitted this victory has given him a selection headache.

Ross, whose side will take on Sheffield United in the third round, said: “It’s a good night for us.

“The vast majority of that team have started league games for us this season and have every right to believe they should be starting games because they performed consistently well.

“The players should take pride in coming to a Premier League team away from home and achieving a victory to put on their CV now, and they can grow in confidence from it.

“No doubt it makes my job harder in keeping them all happy but it’s a nice problem to have as a manager.”