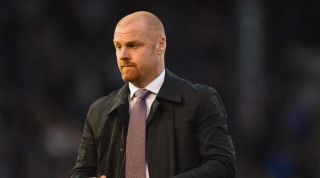 Burnley were promoted as Championship runners-up last season, but Dyche revealed the difficulties of being a small fish in a big pond when it comes to bringing in new players.

Speaking after the 1-0 League Cup second round loss to Sheffield Wednesday at Turf Moor on Tuesday, Dyche underlined his concerns about the inflated price tags being fixed to potential transfer targets.

"The only concern I have is the reality of the market, which is at an all-time high," the manager, whose side have lost their opening two league games, told the club's official website.

"As a club we have certain financial guidelines that we have to work to and it's difficult to work within, just by going into the Premier League.

"You have seen the spending power of others and it's challenging. It's as simple as that.

"We've been in for a few, but there is not just us in for them.

"Equally, we've been in for some and people bigger than us throw way more money at it. There is only a small pool of players in our market and it is a tough one, there's no two ways about it.

"It's just the reality of being Burnley football club and going into this new world."

The 43-year-old, who has signed seven players for the new campaign, including Lukas Jutkiewicz, Michael Kightly and Marvin Sordell, also claimed that it was easier to attract players in the second tier.

He added: "Weirdly, it's more difficult to sign players than last year because the market has changed radically.

"If you look at Charlie Austin's price last year and what he would be worth now, it's a massively different market within one year and I think that's taken most by surprise.

"We are Premier League now and if you go in for any player, trust me, the value goes up radically than it was just a few months ago when we were in the Championship."