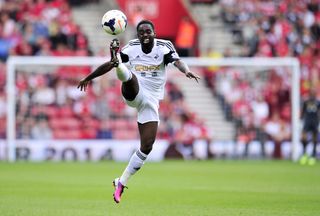 The Welsh side have lost their last two Premier League fixtures to leave them 15th in the table after seven matches, with just goal difference keeping them from the bottom three.

And while a clustered calendar of fixtures will also be partly to blame - with Michael Laudrup's men having played five games in the last two weeks - their home form has not helped them out.

Swansea, whose debut appearance in the UEFA Europa League has increased their fixture burden, have taken just than one point from three matches at the Liberty Stadium and Dyer knows that they have to do better.

"We have been disappointed with our results at home and that we haven't made the Liberty a fortress so far," he told the club's official website.

"Every team knows they are in for a tough game when they come to Swansea, but we want to make up for the first few results we have had at home so far.

"These next few home games are crucial for us. We really want to win those and put more points on the board.

"We obviously want more points, but we've had some very hard games and juggled that with other competitions too, which has been a new experience with European football on the agenda.

"But even if we were in the top four or six right now this group wouldn't get too excited because we know it’s a marathon and not a sprint."

Laudrup's men will continue their campaign with a home fixture against rock-bottom Sunderland on October 19.