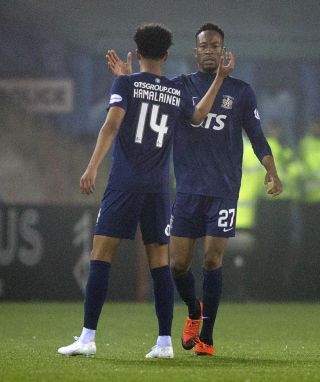 The 27 year-old was signed from Hartlepool last month to provide support to Brophy and has now scored three goals in his first four appearances, including Killie’s third against Ross County on Saturday.

With Brophy also netting a double in the 3-1 Ladbrokes Premiership victory, Dyer was pleased to see his plan come to fruition.

He said: “It is great the two strikers scored but that’s why they are here. I brought Nicke in to play alongside Eamonn as it helps him.

“When Eamonn is playing well we are a better side and he needed help up there.

“Nicke has come in and given him a bit of help so Eamonn can do his stuff – Nicke has been excellent since he walked through the door.”

County co-manager Stuart Kettlewell felt his team would need to change their mentality after extending their winless streak to seven matches.

He said: That’s our job (to try to fix that). It’s reared its head a couple of times this season but we’ve always bounced back.

“After the negativity of the result against Ayr in the Scottish Cup we produced some really good performances against Celtic – I know we lost but I can’t see many teams creating as many chances as we did against them. Our game against Rangers was similar.

“For us, it’s about finding that level of consistency and we’re going to need a reaction to this when we play Livingston on Wednesday because it’s always a test of your character against them.”

Kettlewell was frustrated that his defenders had not paid heed to certain elements of the pre-match game plan.

He added: “We tried to make them aware of certain scenarios in the game.

“For example, Brophy cutting inside to get on his right foot for the first goal because that’s what he does. They need to be switched on when that happens.”