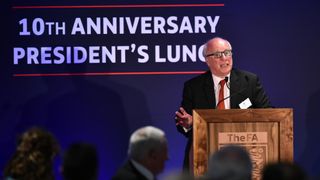 Greg Dyke was not a supporter of Brexit, but he hopes it will help Premier League clubs put more trust in English youth.

Dyke has spent three years as FA chairman but is stepping down and, in an email, said he wanted to see more English players playing in the top flight, which he says is crucial to improving the fortunes of the national team.

England crashed out of Euro 2016 in shocking fashion as they suffered a 2-1 defeat to minnows Iceland in the round of 16.

The country's under-19 side fared much better at their European Championship, making the semi-finals before being knocked out by Italy, which Dyke says shows England is on the right track when it comes to elite junior development, but that could be ruined without proper exposure to top-flight senior football.

"While we haven't done well in the two senior men's tournaments in my time - the World Cup in Brazil and this summer's Euros in France - I believe we have put in place some of the basics we will need to fulfil my publicly stated ambition for England to win the World Cup in 2022," Dyke wrote.

"The performance of our under-19s this week in Germany shows we are heading in the right direction. Remember these are many of the same players who won the under-17 Euros two years ago and they will be in their prime by 2022.

"However, the problem still remains that these players need Premier League experience if they are to grow into the talented, mature players we need.

"In fact getting our young players real experience at the top level still remains, I believe, English football's biggest problem.

"Fewer home-grown players than ever started matches in the Premier League last year. Although I was not a supporter of Brexit, it could be that by leaving the EU this problem could be solved."