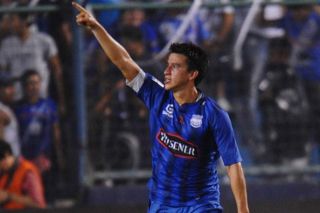 Gustavo Quinteros' men moved top of the league in sensational fashion on Sunday, scoring five times in a blistering first half at the Estadio George Capwell.

Denis Stracqualursi netted a brace in the opening half to go with goals from Fernando Gimenez, Yorman Valencia and Fernando Gaibor.

Osbaldo Lastra and Marcos Mondaini completed the scoring in the second half as Emelec, who had failed to score in their previous two outings, extended their unbeaten run to five matches.

Former Everton striker Stracqualursi started the scoring when he headed in a set-piece on 11 minutes.

It was 2-0 on 27 minutes when Gimenez dispossessed a Catolica defender in the area before placing his finish into the bottom corner.

More awful defending led to Emelec's third in the 39th minute as a poor clearance fell for Stracqualursi to score from close range.

Valencia scored on the counter-attack just before half-time, sprinting past his defender before rounding the goalkeeper to place into an empty net.

The half only got better for Emelec in the second minute of additional time as Gaibor completed a fine team move with a good finish.

The hosts looked on track for double digits when Lastra scored four minutes into the second half.

But they had to wait until the 78th minute to find a seventh as Mondaini converted in a one-on-one to complete the huge win.

Deportivo Quito drew 1-1 at home to Deportivo Cuenca, Manta were beaten 1-0 by Barcelona and Deportivo Quevedo overcame Macara 1-0 in their bottom-of-the-table clash.