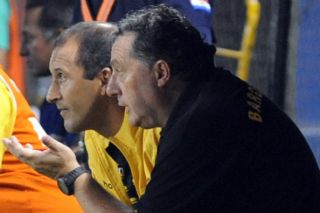 Third-placed LDU had not kept a clean sheet in their previous four matches, but did so without claiming the points at home to Ruben Israel's Barcelona (36 points).

LDU failed to score for the first time in 10 matches, but extended their unbeaten streak to seven.

Despite failing to break down one of their top rivals, LDU (34 points) failed to lose any ground on the top two - and gained ground on Independiente (40).

Emelec edged Independiente 1-0 late on, Angel Mena striking at the death to see them move within two points of third-place LDU.

Olmedo, who climbed off bottom, and ninth-placed Universidad Catolica were other sides to get on the winners' list.

Olmedo were 3-0 winners at LDU Loja, with Alvaro Navarro, Cristian Palacios and Andre Skiadas all netting in what equalled the club's biggest win since promotion from Primera B last year.

Catolica, who have scored in their past six games, broke a four-match winless run with their 2-1 victory over Manta.

Mid-table Deportivo Cuenca are without a win in three, after drawing 0-0 at Deportivo Quito.

Mushuc Runa earned their first point in four outings, coming from behind to draw 1-1 at home to fifth-placed El Nacional.