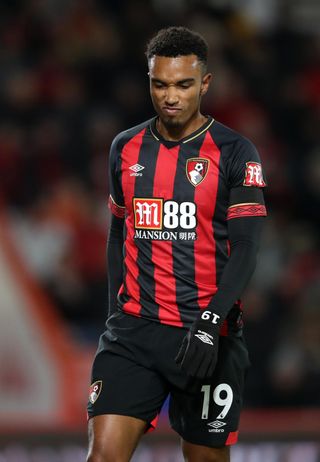 Bournemouth manager Eddie Howe believes Junior Stanislas will bounce back from yet another injury blow in a rotten run for the winger.

The 29-year-old could miss the start of next season after undergoing an operation on a hamstring problem that is expected to keep him out for three to four months.

It will mean a second consecutive pre-season on the sidelines for Stanislas, who finished 2018 with a knee issue which sidelined him until September before a hip problem kept him out for another two months this year.

Stanislas was injured midway through the first half of last week’s 1-0 home defeat to Fulham, having been drafted in to the starting line-up at late notice to replace right-back Adam Smith, who was hurt during the warm-up.

It was only his 14th start, and 27th appearance, of the season due to his numerous setbacks.

“I think Junior’s mentality is very strong,” Howe added. “He’s had to overcome similar problems previously and he’s always come back and played a big part for us.

“Though he’s not played a huge number of games he has contributed to the team when he has played.

“The challenge for us and Junior is to keep him consistently fit because when he does play he’s got undoubted talent.”

The injuries to Stanislas and Smith leave Bournemouth short of options at full-back going into Saturday’s trip to Southampton, with Nathaniel Clyne battling hamstring problems and Diego Rico and Charlie Daniels out.

Though the Cherries are safe, Howe accepted their recent form is a major concern as they have won only two of their last 11, losing seven, putting added importance on the visit to their south-coast neighbours.

“We don’t want to go into next season with negative momentum,” Howe said.

“The way we finish the season is very important. We have to go into Southampton and give a good account of ourselves, we know how big the game is for our supporters.

“Southampton have been in great form, done very well since the new manager went in there with their mentality, so we know we’re going to need to be at our very best.

“It will be a very entertaining game, I’m sure the atmosphere will be very good. We need to make sure we impose ourselves on the game and our last away game in Brighton will be a good platform, we need to match the intensity of that performance.”

And though their Premier League status is assured, Howe insisted it was too soon to start thinking about the summer transfer window.

Asked about reports linking the club with Stoke goalkeeper Jack Butland, Howe said: “We haven’t formulated any plans regarding transfer targets or anyone towards next year.

“We’re firmly looking at this season. We’ll have those conversations with the owner and the respective people at the club towards the close of the season where we’ll formulate our plans.”