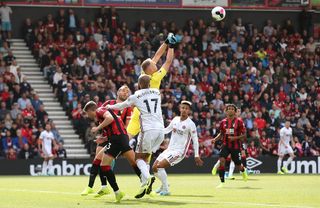 Bournemouth manager Eddie Howe has challenged rookie goalkeeper Aaron Ramsdale to go on and establish himself as first choice.

The 21-year-old was handed a start ahead of experienced duo Artur Boruc and Asmir Begovic in the opening match of the new Premier League campaign against Sheffield United, which ended 1-1.

Ramsdale had loan spells at both Chesterfield and AFC Wimbledon after leaving the Blades in January 2017.

Howe feels how England Under-21 international Ramsdale goes on from here will be down to the player.

“He will dictate what happens from this point onwards. We believe in Aaron. He is a very talented young goalkeeper and has had good experiences out on loan,” said Howe, whose side travel to Aston Villa on Saturday.

“He did very well in his loan spell at Wimbledon, so on the back of the pre-season he delivered, where he was hugely impressive, I felt he deserved to start (against Sheffield United) and did well in the game.

“I was very pleased with him, but it is like any position we have got at the football club, the future of those shirts and jerseys, who wears them will be dictated by the players themselves.

“When you sign younger players like Aaron, you know you are going to have to develop them, where they work behind the scenes.

“Sometimes a loan spell will do them good, they come back and you hope one day they are good enough to step up into the team.

“I am sure from Aaron’s perspective it has been a really good journey and I am sure he has enjoyed the different experiences he has had.

“Now he is here in this moment, and I am sure he wants to grab every chance he gets.”

He said: “Jordon Ibe will not be going anywhere. He’s an integral part of our squad.”

Howe feels his side can produce the required response at Villa having failed to see off fellow newly-promoted side Sheffield United.

“The unfortunate thing for us is that we have not played well and not won the game, which historically in the Premier League has been very difficult for us,” he said.

“We didn’t quite get over the line against Sheffield United, but we have learned from the match.”

Howe confirmed midfielder Lewis Cook is in the final stages of rehabilitation from the serious knee injury suffered last season.

“Lewis Cook is out working in America with a specialist and it’s going really well,” he said.

“It’s good news and he is in the last stages before he can return to full training with the team.”