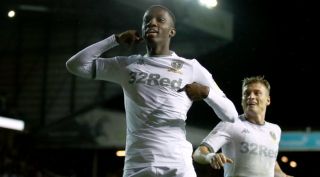 Nketiah is convinced that he made the right choice in leaving Arsenal for Leeds, and believes he will come back to north London stronger.

Emery blocked the youngster's proposed loan move to Augsburg at the start of last season, but Nketiah didn't see too much first-team action with Alexandre Lacazette and Pierre-Emerick Aubameyang ahead of him in the pecking order.

The 20-year-old feared the same situation may arise this season, and so took the decision to defy his manager.

"The manager wanted me to stay so it's really confidence-boosting for me that he had me in his plans," Nketiah said, as reported by Football.London.

"But I felt like it was a good step for me to come to Leeds. I hope it's a good year that can leave me in good stead going back to Arsenal to fight for a place.

"There were a lot of options, there were options for me to go to Germany, but me, my family and the club decided Leeds was the best place."

Nketiah scored a brace for England's Under-21s against Turkey last night, with fellow Arsenal youngster Reiss Nelson scoring the other in a 3-2 win.

Quiz! Can you name the line-ups from the last two England B team matches?