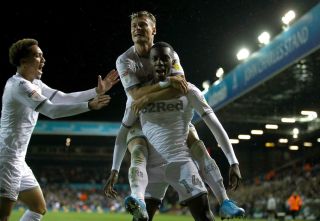 Eddie Nketiah made a name for himself at Elland Road by coming off the bench and netting a late winner as Leeds returned to the top of the Championship with a 1-0 victory over Brentford.

With former Arsenal striker Ian Wright watching on from the stands, the Gunners loanee was sent on for his Championship debut in the 77th minute in a bid to find a goal.

Former United defender Pontus Jansson appeared to be helping his new side to a point on his return to the stadium where he made his name in English football.

A fans’ favourite at the Whites, the Swede’s departure to the Bees for just £5.5million this summer baffled many of the home supporters.

Jansson was the subject of occasional boos and chants of ‘You’re Leeds and you know you are’, but could not prevent Nketiah’s winner.

England Under-21 boss Aidy Boothroyd, plus cricketers Chris Woakes, Jonny Bairstow and Jack Leach were among the spectators as Jansson lined up against his former side.

Leeds made a sloppy start, struggling to find their usual fluency, and Brentford were a post away from breaking the deadlock in the 24th minute.

Bryan Mbeumo let fly with a left-footed strike from 25 yards that beat Casilla but cannoned off the woodwork.

The hosts responded by racing down the other end and Mateusz Klich tested goalkeeper David Raya with a low left-footed volley.

A stretching Patrick Bamford headed over the top and then, having beaten the on-rushing Raya to the ball, nodded just wide of the empty net.

Former Brentford midfielder Adam Forshaw ended the first half by skewing a header wide and started the second with a rasping drive that Raya held.

Leeds looked a different team after the interval, pinning Brentford in their own half, with Pablo Hernandez’s powerful effort just flying over the top.

Elland Road was crying for a penalty in the 64th minute when a Klich shot hit a Brentford player on the arm in the box, but referee Andy Davies was unmoved.

Leeds were always susceptible on the counter attack and the warning signs were there when Watkins curled wide.

But Marcelo Bielsa introduced Costa and Nketiah, with the pair combining to devastating effect nine minutes from time to raise the roof.