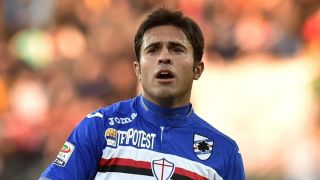 Inter head coach Roberto Mancini believes Eder can have a big impact at San Siro, but warned he is not an immediate saviour ahead of his potential debut against AC Milan on Sunday.

The 29-year-old forward signed for Mancini's side from Sampdoria on a two-year loan switch on Friday, a deal that the club have the option to make permanent.

Italy international Eder has made a fine start to the campaign, scoring 12 goals in 19 Serie A games – a record only bettered by Napoli star Gonzalo Higuain.

His arrival comes after Inter have won only two of their last seven matches in all competitions and prepare to play rivals Milan, but Mancini does not want all the pressure on his new signing's shoulders.

Asked why he opted to move for Eder rather than a midfielder at his pre-match media conference, Mancini said: "Because we had this little problem of struggling to score goals and needed another option.

"Eder can give us a big hand, but we must not think that with him in the squad everything will suddenly change. He can play in any role, as centre-forward, support striker or wide in a 4-3-3.

"I don't know if Eder will start. He was a little tired on Friday after all the journeys to complete the transfer. We will evaluate his condition on Sunday.

"This move is a great opportunity for him and for us too. He will be able to help us greatly because he has a lot of important qualities and offers something different than the other players."