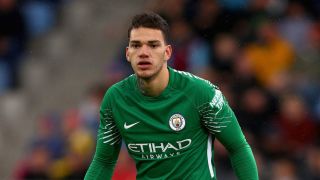 Ederson will make his Champions League debut for Manchester City at Feyenoord, four days on from being substituted with a head injury against Liverpool.

The Brazilian goalkeeper left the field on a stretcher after Sadio Mane caught him with a boot in the face – a rash aerial challenge that saw the Reds forward sent off.

City went on to make their numerical advantage count with a 5-0 win and Pep Guardiola has made one change to that line-up for the Group F opener at De Kuip.

Playmaker Bernardo Silva is in for fellow close-season recruit Danilo, meaning City look set to revert from a 3-5-2 setup to a 4-4-2 diamond formation, with Sergio Aguero and Gabriel Jesus resuming their partnership in attack against the Eredivisie champions.