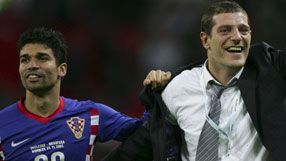 The Gunners' goal-getter - now fully recovered from the horrific ankle injury sustained at Birmingham City in February 2008 - is desperately hoping for an injury-free 2009/10 in order to help Arsene Wenger's side finally end their four-year trophy drought.

While three days before the Premier League kicks-off, the striker will be heading to Minsk with Croatia, aiming to take three precious 2010 World Cup qualification points away from Belarus to keep them in contention for a second-placed finish behind runaway Group Six leaders England.

And the Brazilian-born forward, who has netted 14 goals in 24 caps, has praised national team coach Bilic and his calming influence that rubs off on the players.

"We’ve got a great deal of respect for him. He doesn’t put pressure on you," he told FourFourTwo magazine.

"He’s not going to yell at you in your first wrong pass or shot out wide. He’s not that kind of coach.

"He will talk to you, have a coffee with you. If you pass by him with a cookie in your hand, he’ll tell you there’s no need to hide it from him because he’s been a player and knows there’s no problem in eating a cookie.

"He makes you feel relaxed. But if things are not going well in a game he can be energetic at half-time and try to lift the team’s spirit."

The full interview with Eduardo - in which he talks about his infamous injury and the pressures of filling Thierry Henry's boots - can be found in the August issue of FourFourTwo magazine, in shops now.