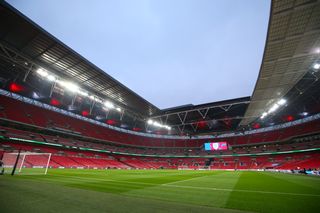 The 2020 EFL Trophy final will be delayed until next year following discussions between the league and the finalists Portsmouth and Salford.

The match at Wembley was originally scheduled to be played on April 5, but the professional game in England was suspended at that point with the country in an enforced lockdown due to the coronavirus pandemic.

The clubs held fresh discussions with the EFL on Wednesday and it was decided to look again at scheduling options at the end of the year, with a view to playing the match in 2021 in front of as many supporters as is safely possible.

An EFL spokesman said: “The EFL has today met with representatives from both Portsmouth and Salford City in respect of the 2020 EFL Trophy Final, postponed as a result of the Covid-19 outbreak.

“All parties have agreed to revisit the options at the end of the year, with the primary objective remaining to find a suitable date in 2021 for a rescheduled final to take place with as many supporters in attendance as possible.

“The match therefore remains postponed and the EFL will advise of any further developments as soon as they are available.”

EFL chairman Rick Parry is understood to be involved in a meeting with the Secretary of State for Digital, Culture, Media and Sport, Oliver Dowden, on Wednesday over the return of spectators to matches.

The meeting also involves representatives from other sporting bodies, and comes after the government announced it was reviewing plans for stadiums to be able to open to a limited number of spectators from October 1, because of a spike in coronavirus cases nationwide.

The #EFL has issued the following statement in respect to the return of supporters. pic.twitter.com/vbeP47WP6g— EFL Communications (@EFL_Comms) September 16, 2020

A letter from the EFL’s head of policy John Nagle to the 72 clubs on Tuesday warned that the next 48 hours would be critical in the direction of travel on this matter.

The EFL said on Tuesday it was still hoping its clubs could be involved in pilot events this month, with capacities now capped at 1,000 irrespective of the size of venue.