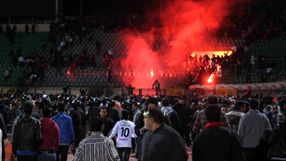 Judge Abdel Magid Mahmoud walked out as the defendants jumped on benches in the courtroom's steel cage and waved their fists at the bench, denying any role in the deaths and demanding that the true culprits be punished.

"Either we get justice for them or we die ourselves!" the defendants yelled.

The judge returned when calm was restored and set May 5 for the next session to give the court time to call witnesses, prepare documents requested by lawyers and summon more of the accused to stand trial.

Many of those killed on the night of February 1 were crushed when panicked fans tried to escape from the stadium after a post-match pitch invasion by supporters of local side Al-Masry. Others fell or were thrown from terraces, witnesses said.

It was the country's deadliest incident since protests toppled long-serving President Hosni Mubarak in February 2011 and it deepened frustration that a police force weakened by last year's uprising seemed unable to protect the population.

Fans of the visiting team, Al Ahly, accused the Interior Ministry of deliberately causing the disaster in revenge for their role in toppling Mubarak and their continued hostility to an unreformed police force.

The court ordered that Interior Minister Mohamed Ibrahim and the heads of al-Masry club, the Egyptian Football Association and the Supreme Sports Council be named as concerned parties in the case, meaning they will not be exposed to criminal charges but may be told to pay compensation if found responsible for acts of their subordinates, state news agency MENA reported.

A parliamentary inquiry blamed fans and shoddy policing for the deaths and the head of state security in Port Said was fired along with the board of the football association.

"The accused used different types of sharp weapons, explosives and stones and waited for the fans in Port Said stadium to arrive to watch the match between Egypt's Ahly vs Port Said clubs," the general prosecutor told the court.

The 61 were charged with premeditated killing and 12 others, including nine police officers and three Masry club officials, with helping cause the disaster.

The interior ministry has refused to provide security at football matches since the disaster, forcing the cancellation of the rest of the top-flight league season.

Hundreds of protesters outside the court building demanded justice for the victims. Some fans wore black shirts imprinted with the words: "When I forego the rights of the martyrs, I will surely be dead".

"We only want the justice of God," said Ahmed Khater, 55, whose son died in the stadium.

Many of the protesters outside the court were Ahly fans who see the trial as a last chance to reassert their dignity.

Some likened the case to the ongoing trials of Mubarak and other state officials blamed for the deaths of more than 800 people in last year's uprising.

"We will not allow any