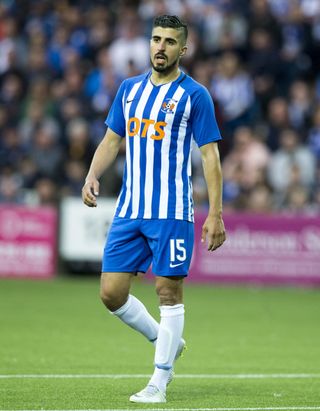 Mohamed El Makrini admits he is desperate to avoid a relegation fight with Kilmarnock after his previous brush with the drop saw him trapped inside a stadium for three hours as angry fans rioted outside.

The Dutch midfielder was part of the Roda side demoted from the Eredivisie in 2018 after they lost a play-off clash with second-tier outfit Almere.

The loss sparked a furious response from the Roda faithful, with El Makrini and his team-mates unable to escape the Parkstad Limburg Stadion as trouble kicked off outside.

Those scenes are unlikely to be repeated at Rugby Park but El Makrini and boss Alex Dyer both admit Killie could find themselves in a battle at the bottom if they cannot halt their worrying run of form when they host Ross County on Saturday.

The Ayrshire outfit have dropped into the bottom six after losing seven straight Ladbrokes Premiership clashes and now sit just five points above the drop zone.

El Makrini said: “In a season you have ups and downs but this is a really bad down for us. It’s hard to stay positive but you need to do that otherwise things will only get worse.

“I was relegated one time before with Roda. We went down through the play-offs.

“We played a team from the Dutch Championship and thought we could win – but we lost.

“It was the worst experience of my career. It was really difficult and something I never want to go through again.

“After the match we couldn’t get out of the stadium because the fans were frustrated. There was a lot of bad things and I would never want that for any club and definitely not Kilmarnock because it’s a really bad situation.

“The fans were really angry. The game finished about 10 o’clock but I didn’t get to go home until 1am because we couldn’t get out of the stadium.

“But I think the squad we have here has much better qualities than the one I had at Roda.

“We need to stay in the league and we can do it. We just need that a sprinkle of good feeling and then we can go on.”

But the Englishman has suffered five defeats since taking over and now admits: “It’s a concern because if you don’t win games you’re going down the other way.

“But I don’t feel we’re too far off the mark. Hopefully things will turn tomorrow against County.”