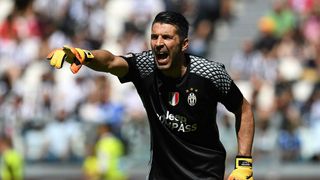 Mario Mandzukic, Paulo Dybala and Alex Sandro scored the goals in a 3-0 win over Crotone that completed the second leg of a prospective treble after the Bianconeri clinched a third straight Coppa Italia on Wednesday.

Buffon, 39, believes Juve's domestic dominance will live long in the memory for fans of football across the globe.

"The sixth straight Scudetto is something extremely significant," he told Sky Sport Italia.

"We have written some beautiful pages that enter the book of football history.

"Winning is never easy. Staying at the top is synonymous with sacrifice and dedication on the part of everyone."

Juve have a chance to claim a first treble in the club's history when they take on Real Madrid in the Champions League final in Cardiff on June 3, and Buffon warned against complacency.

"I thought for a whole week about the Champions League final with Real Madrid, so I was practically on vacation at Roma and totally embarrassed myself," he added.

"I don't like embarrassing myself at the age of 39 so I wanted to react. After that ugly performance we needed to find the right energy again."