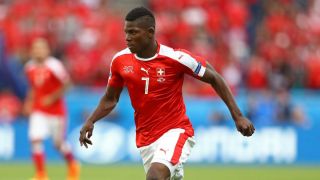 Belgium international Breel Embolo hopes to line up alongside Leroy Sane for Schalke.

The 19-year-old forward agreed a five-year deal last month, becoming Schalke's record signing as he moved to the Bundesliga club from Basel in his homeland.

Embolo is seen as a potential replacement for star attacker Leroy Sane, who has been increasingly linked with a big-money switch to Manchester City, but he would prefer if this was not the case.

"I did not come as an apprentice I want to help, win and score goals," he said, when presented to the media at Schalke on Friday.

"I would be happy to play with Leroy. But I know the situation, which is not as easy as it looks from the outside."

Embolo credited a positive initial meeting with sporting director Christian Heidel and newly appointed head coach Markus Weinzierl as a key factor in his decision to join a club he recognises as a place young talent can flourish.

"Schalke is a fantastic club with a huge tradition and positively crazy fans," he said. "My wish was always to play in the Bundesliga.

"[After the] first conversation with Christian Heidel and I had a good feeling, the chemistry between us just worked.

"Schalke has given in the past repeatedly young players the chance to develop to become better and better."