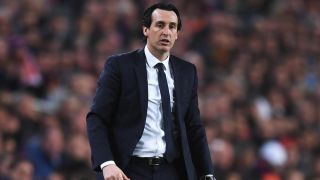 Unai Emery has conceded defeat in the race for the Ligue 1 title and has offered Monaco his congratulations, even though Paris Saint-Germain can mathematically still catch the leaders.

PSG beat Saint-Etienne 5-0 on Sunday to postpone Monaco's title celebrations, but the Stade Louis II side's 4-0 win over Lille means their first title since 1999-2000 is a mere matter of time.

Monaco need just one point from their last two games and even two defeats are unlikely to cost them due to their superior goal difference.

Emery has now acknowledged PSG's dominance has come to an end after four seasons and he is determined to improve ahead of next campaign.

"Monaco have had a great season," Emery told reporters.

"Mathematically they have not secured the title yet, but I congratulate them on the great job they have done. This competition for the title is good for French football.

"We have to be critical of our own performances. I am always critical in order to keep improving."

A draw against Saint-Etienne on Wednesday will suffice for Monaco to win the title.