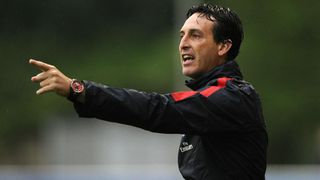 Unai Emery could dip into the transfer market to bolster Paris Saint-Germain's attack as he seeks to guide the club to domestic and elusive European glory.

PSG dominated Ligue 1 during the reign of Laurent Blanc, but their failure to make a mark in the Champions League led president Nasser Al-Khelaifi to bring in a new coach.

And as Emery - who guided Sevilla to three Europa Legaue titles - seeks to deliver on multiple fronts, he conceded some strengthening of his squad may be in order.

"It's very important to get to know the team and the players, and I've been able to do that over this tour, but also to see how the team will play and if there are enough players in this squad to handle what we'd like to do this season," he said after the 4-0 International Champions Cup win over Leicester City.

"I'm very happy with the team, with the experienced players but also the young players. Whether the attack maybe needs complementing I'm not too sure, but what we have at the moment, to be able to perform, to have a good season, we do have a big team at the moment capable of doing that.

"Other players could join in attack perhaps, that is a possibility.

"The team can do important things, but that's not to say that last season wasn't good. Last season was very good, we need to continue to improve.

"It won't be easy, but it's our aim to continue working hard and achieve those objectives, and obviously in the Champions League, which has the best teams in Europe. Paris Saint-Germain is part of that and we want to continue in that way."

Emery will have the chance to secure his first piece of silverware with PSG when they face Lyon in the Trophee des Champions on Saturday.

The capital club begin their title defence at Bastia the following Friday.