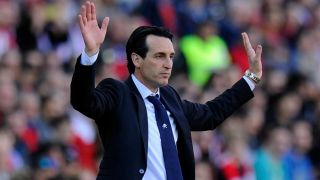 Sevilla coach Unai Emery wants to be "as far away as possible" from Barcelona in the Copa del Rey semi-finals.

Emery's men qualified for the last four of the competition courtesy of a 5-0 aggregate win over Segunda Division opponents Mirandes.

And the 44-year-old is keen to avoid the reigning champions when the semi-final draw takes place.

"If you tell me I have to pick our opponents, I'd tell you I want to be as far away as possible from Barcelona," he said.

"It is a competition that every Sevilla fan wants to win, they want us to do something beautiful.

"Mirandes was a worthy opponent as they showed in the first game.

"We want to do something important now."

After a 2-0 win at home in the first leg, Sevilla breezed through to the semi-finals thanks to goals from Vicente Iborra, Juan Munoz and Coke.

"After the first result our objective in the return leg was to score a goal," he added.

"We try to win every game but Iborra's goal calmed us down a lot and gave us the confidence to deal with anything Mirandes threw at us."

Sevilla and Barcelona are joined by Valencia and Celta Vigo in the semi-finals.