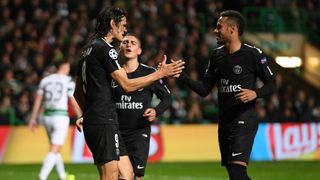 A €222million arrival from Barcelona, Neymar has hit the ground running in Paris, scoring five goals in as many matches following his opener against Celtic in the Champions League.

PSG team-mate Cavani – the side's penalty taker – has not been overshadowed by Neymar or teenage sensation Kylian Mbappe, netting nine goals in all competitions.

With PSG's expensively assembled trio comes the need to manage egos but Emery said Neymar and Co. are united to deliver Ligue 1 and Champions League success.

"Neymar came here knowing that we all want to do something together," Emery told reporters. "With his abilities, his qualities, he can help us to achieve the goals.

"He can also achieve his individual goals. But he also knows there are a lot of good players here. He deserves to be here. We'll work with him. I talked with Neymar about his role. I spoke with Cavani as well.

"I think both are smart players. They need each other. They do the work together. If the first penalty is taken by Cavani, another will be for Neymar."

Ligue 1 leaders PSG host Lyon on Sunday, looking to make it six wins from six games in the league.