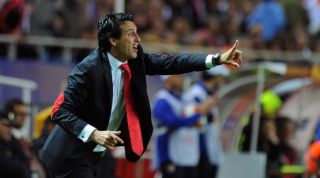 Emery spent four years as coach at the Mestalla between 2008-12, leading them to three consecutive third-place finishes in La Liga and the 2011-12 Europa League semi-finals.

On that occasion, Emery's Valencia were vanquished by eventual winners Atletico Madrid, but his hopes of reaching this season's showcase are boosted by a 2-0 first-leg win in Seville.

Valencia reached the semi-finals thanks to a stunning turnaround against Basel, winning 5-3 on aggregate, despite a 3-0 first-leg loss in Switzerland.

And Emery remains wary of his former club's capacity to spring a surprise at the Mestalla on Thursday.

"For me to be here again – I can't explain how good those four years were, but I am putting these feelings aside," he said.

"I'm not looking to defeat Valencia; I'm looking to guide Sevilla through to the final.

"I've played a semi-final before, with Valencia in the Europa League, but I lost to Atletico. I have another chance now with Sevilla.

"We are all in a good place, close to something extraordinary.

"We know it's going to be a tough game. We need to continue what we did in the first leg, recognising Valencia's threat and potential.

"I have faith in our ability.

"Before the first leg I said our chances were 50-50. Now the odds are stacked a bit more in our favour but we must be very cautious and play with a lot of respect for our opponents."