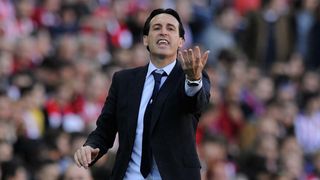 Sevilla coach Unai Emery does not want Spain's football authorities to give Barcelona "a second Lionel Messi" and allow the Copa del Rey final to be played at Camp Nou.

Emery's side booked their place in the decider – and a May date with Barca – after drawing their semi-final second leg with Celta Vigo 2-2 at Balaidos on Thursday.

The result handed Sevilla a 6-2 aggregate victory and a first Copa final appearance since they won the competition in 2010.

Now La Liga leaders Barcelona are all that stands between Emery and the famous trophy and he is keen to ensure a level playing field before kick-off.

"I hope the final will not be like the past in the Nou Camp [this] year," he told a press conference. "I'd rather play earlier in China than there.

"I hope [there is] not the injustice to play there because it would give more advantage to Barcelona. It would be like giving them a second Messi."

Asked if he wanted the final to be played at the Santiago Bernabeu – the home of Real Madrid – Emery said: "I want to play where the fans of Sevilla feel more comfortable, but not in the Nou Camp."

Reflecting on his players' display at Balaidos, where goals from Ever Banega and Yevhen Konoplyanka cancelled out Iago Aspas' double strike for Celta, Emery expressed his satisfaction.

"I am very proud of my team, and more about how the game has passed," he said. "We have competed without the ball, then with ball. It was also important to get out of here undefeated."

Sevilla president Jose Castro is equally as adamant that Barca must not be handed a home game in the final.

"Sevilla obviously will not play at Camp Nou," said Castro. "The Calderon may be an option, the Bernabeu may be an option. This just finished and I guess that between tomorrow and Monday will meet the RFEF. For us, where the fans see comfortable will prevail."

Emery will have to do without midfielder Steven N'Zonzi in the final, after the midfielder received a second yellow card after the match for dissent.