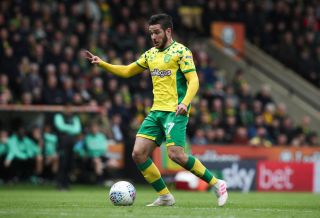 Argentinian Buendia, 22, arrived from Spanish side Getafe last summer and proved to be a key member of Daniel Farke’s squad which went on to win the Sky Bet Championship.

Buendia scored eight goals as well as creating many more as the Canaries secured promotion back to the top flight.

“I’m very happy to sign a new contract and that I’m going to have more years wearing the yellow and green shirt,” Buendia said on the Norwich website.

“To wear it in the Premier League, it’s so exciting. It’s a new challenge now and I hope it will be a good season like the last one.

“I couldn’t have imagined having the season we did (when I signed). I think it was a very good one for us, we played beautiful football.

“We were concentrated in every game and we deserved to get promotion and to become champions of the Championship.”

Buendia helped make 12 goals for his Norwich team-mates last season and is relishing the chance to showcase his talents in the Premier League, which kicks off with a trip to European champions Liverpool on August 9.

“I think it was my best year with the goals and assists,” he said.

“I enjoy it so much in Norwich. I’m very happy living here with my family. I also have very good team-mates, we play really well together and we love training with each other.”

Buendia added: “The first week (of pre-season) was really, really hard, but the preparation is very important for the season.

“Liverpool at Anfield is possibly one of the best games of the year. Against the Champions League winners, it’s a good start – but we want to enjoy it and we want to win.”

Norwich have been quick to tie down key men on new contracts this summer, with 30-goal striker Teemu Pukki one of those to also sign on for the long-term.

Farke has also looked to strengthen his squad, bringing in veteran goalkeeper Ralf Fahrmann on a season-long loan from Schalke, while Swiss striker Josip Drmic and winger Patrick Roberts – on loan from Manchester City – are also on board.

Former Arsenal youngster Charlie Gilmour has, meanwhile, been signed on a two-year contract. The 20-year-old defensive midfielder is expected to feature initially for Norwich’s Under-23s next season.