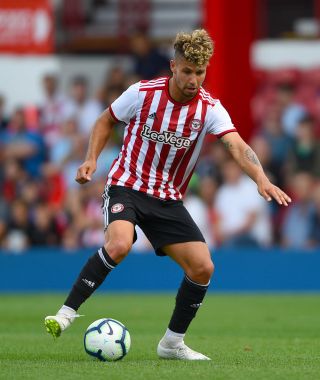 Emiliano Marcondes fired a young Brentford side into the FA Cup fourth round at the expense of Stoke.

The Bees, who made 10 changes from their last Sky Bet Championship game and named just one first-team player in Ethan Pinnock, eased to a routine 1-0 win against a more experienced Potters side.

Brentford took the lead just before the break with a sublime piece of skill from Danish midfielder Marcondes.

The playmaker, just back from a loan spell at Danish outfit Midtjylland, curled a beautiful drive into the far top corner, almost from the corner flag, to give the Bees the lead.

His 44th-minute strike was the first shot on target in a largely subdued opening half played mainly in midfield between the two Championship sides.

Stoke pressed early on and were the first to show when Tyrese Campbell lashed a snapshot just over the bar from the edge of the area.

At the other end, Mads Roerslev burst forward and his square ball found its way past a sea of Stoke legs into the path of former Arsenal wing back Dominic Thompson, who sliced his first-time effort well wide.

The deadlock was broken just before the break when Thompson was cleaned out on the touchline by Campbell and returning hero Marcondes scored his debut goal for the Bees after 32 appearances.

His shot was well placed into the far top corner, but there had to be a question mark over debutant Potters keeper Adam Davies, who was caught napping at the near post.

Dru Yearwood came close to stretching the Bees’ lead just after the break but his early effort flew just wide.

Even that failed to spark any real urgency from the visitors, whose first effort after the break came when Nick Powell’s speculative drive flashed just over the bar in the 70th minute.

Teenager Yearwood had a great chance to wrap up the tie for the hosts three minutes later when he burst through, but he snatched at his shot which cleared the bar.

Brentford debutant Halil Dervisoglu, a new year signing from Sparta Rotterdam, was a big plus for Thomas Frank’s side throughout and was unlucky not to make it two with a neat shot on the turn that just cleared the angle.

Substitute Sam Vokes added some spirit to a lacklustre Stoke side and could have bundled them back into it after 83 minutes, but his effort from a tight angle squirted just wide.

Vokes saw another late drive deflected just over and a Campbell drive suffered the same fate as the young Brentford side featuring seven B-team players dug in.

In the end it was the Bees who almost had the final say, when Marcondes came close to adding to his tally as he cut in from the right and forced Davies into a smart save at the foot of his post.