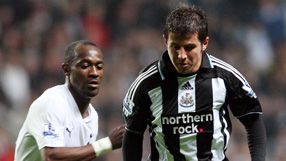 The accusation, denied by Belozoglu, cast another cloud over 2011 league champions Fenerbahce whose chairman is currently on trial as a suspect in a multi-million dollar match-fixing scandal that rocked Turkish football last year.

Zokora first levelled the accusation against Belozoglu, who is better known by his first name both in Turkey and internationally, at a news conference following Fenerbahce's 2-0 home win in Istanbul over Trabonspor on Sunday.

"Emre and I had an argument during the game. I beg your pardon for saying this, but he insulted me by saying nigger. What upsets me more is how disgraceful it is for a player who has African team-mates like Sow and Yobo to insult an African from another team," Zokora said.

The following day, Belozoglu told a news conference that he had abused Zokora verbally in English without using racist terms, and that such abuse was commonplace during matches.

"If I have even a little bit of racism, may God take my heart away from this body," Belozoglu said.

Both teams are playing in the play-offs against Galatasaray and Besiktas for the domestic championship. Trabonspor was runner up to Fenerbahce last year, but took its place in the Champions League due to the match-fixing probe.

Belozoglu was accused of racism three times during his three-year career at Newcastle United, but the Football Association's investigations had concluded the accusations were unproven.