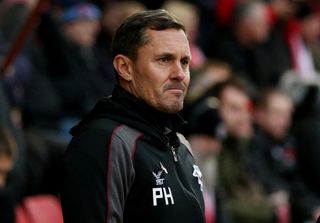 Manager Paul Hurst has left Scunthorpe after the club’s winless run in League Two was extended to five games on Tuesday night.

A 3-0 defeat at Northampton meant the Iron have now taken only two points since their 2-0 win over fellow strugglers Oldham on New Year’s Day, a run that has left them 16th in the table.

“Scunthorpe United would like to announce that manager Paul Hurst and assistant manager Chris Doig have left their positions at the club with immediate effect,” a club statement said.

“We thank them for their efforts during their time at the club and wish them well for the future.”

Hurst, who was appointed in May 2019, became the second League Two manager to lose his job on Wednesday following Colin Calderwood’s departure from Cambridge.