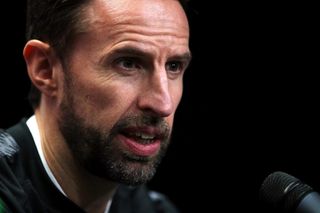 Gareth Southgate has tried to defuse growing tension with Bulgaria, with the England manager stressing that attempts to prepare and support their players in the face of potential racist abuse have been misconstrued by Monday’s opponents.

The Three Lions will seal qualification for Euro 2020 with three games to spare if they win in the Czech Republic on Friday night, but the main focus at the pre-match press conference was the potential for problems three days later.

Southgate took the unusual step of expressing concerns about the potential for racism in Sofia a month ahead of Monday’s match – fears the Bulgarian Football Union called “groundless, inappropriate and unnecessary”.

The BFU’s fury has only ratcheted up in recent days and federation president Borislav Mikhaylov has said England’s players should face sanctions from UEFA if they continue to talk about the possibility of racist abuse in the country.

The former goalkeeper has written to European football’s governing body to express his anger at the comments from the England camp suggesting they could walk off the pitch without following UEFA’s three-step protocol.

Asked about Mikhaylov’s comments, Southgate said in Prague: “I can totally understand why the Bulgarian president feels as he does because we have purely been responding honestly to questions we’ve been asked by you guys (the media).

“That will then be relayed however it may be relayed in Bulgaria, and the way that that’s pitched could appear provocative or appear that we’re the people who are laying the subject on the table.

“So, if I was him, and I was only reading those quotes and not knowing the context of why the things were said and the responses were said, then I would feel probably as he does.

“We are not trying to create a situation at all, far from it.

“We’re all hoping that over the next 72 hours, we’re just talking about two football matches.

“I think both countries would have a strong desire for that, and I have to say again, we don’t look at other countries in a way that we don’t shine a mirror on our own.

“What happened in Hartlepool a couple of weeks ago was probably worse than things I’ve seen or heard about in many other countries in the world. So, I think we have to be very careful in how we cover everything.”

Southgate was referring to last month’s National League match between Hartlepool and Dover, when racist comments were allegedly made and both managers considered taking their teams off the pitch.

As for Bulgaria, the national stadium in Sofia will be partially closed on Monday as punishment for racist behaviour by supporters in earlier home Euro 2020 qualifiers.

Some England players were racially abused on their last trip to Bulgaria in 2011 and the Three Lions’ last qualifier was marred by abuse of some players in Montenegro – something that led Southgate to explain UEFA’s three-step protocol to the squad.

The former defender says that “everybody is very clear” and “100 per cent united on how we see things”.

“Well, firstly, the most important thing for me was that all of the players and all of the staff know that they’re supported, that we’re together on every issue moving forward,” Southgate said.

“Then, of course, inevitably, because we’ve suffered a situation in Montenegro, we wanted to be clear what might happen if something happened in the future.

“We’re very clear on that, there is of course the UEFA process and we need to have faith in that process.

“Recently, a game was stopped in Italy because of that and then everything else is hypothetical because we don’t know the situation that we’ll be in as a team, or that I’ll be in as a manager.

“But, we’re very clear in terms of all of the staff, what would need to happen. We want the players to be able to concentrate on football.

“They want to be judged on their football and what I’ve got to do is provide a safe and secure environment to play.”

Raheem Sterling appeared to pull his ears in celebration after scoring in Montenegro to a backdrop of abuse and is trusting UEFA to act if necessary moving forwards.

“As a player, you know, with the situation that happened in Montenegro, I don’t think, that as a team, we were quite prepared and knowing that there was a protocol in place,” the Manchester City forward said.

“We had a meeting as a group and Gareth sat us down and explained UEFA’s protocol and now, as players, we’ve got to give UEFA a chance to take that responsibility on board and deal with the situation, but at this moment in time. But, yes, I have got full faith in UEFA.”