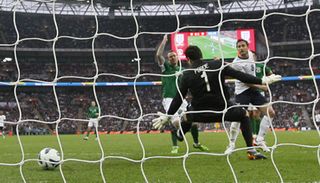 Shane Long gave Ireland an early lead but Frank Lampard quickly equalised and although England dominated possession they failed to conjure up another goal in the teams' first meeting since their 1995 friendly in Dublin was abandoned due to crowd trouble.

Ashley Cole captained England in honour of his recent 100th cap but the left-back had a quiet match before leaving the field to warm applause after being substituted in the second half.

England manager Roy Hodgson was happy with the performance if not the result.

"I thought we played well enough, the quality was good," Hodgson told a news conference.

"But Ireland were very, very competitive, they worked their socks off.

"I am disappointed with the result but I take a lot of positives from the way we played. I knew it would be a tough test. Ireland were firing on all cylinders."

After a lively start by both teams, Ireland took the lead in the 13th minute with an excellent goal.

Right-back Seamus Coleman swung in a teasing cross from the right and Long climbed above Glen Johnson to flick a firm header into the far corner of the net from 10 metres out.

Daniel Sturridge held up possession on the left and waited for Lampard to make a trademark late run into the box and the prolific midfielder controlled the ball before flicking it low into the net from six metres.

England have not beaten Ireland since 1985 and they struggled to break down Giovanni Trapattoni's fiercely committed and well organised side.

Theo Walcott made a couple of jinking runs down England's right and tested Ireland goalkeeper David Forde with a rasping shot after 65 minutes.

Cole nearly got on the end of another dangerous Walcott cross but the Irish defence scrambled the ball away.

"It was a great pass from Theo and I tried my luck and thought I could get on the end of it but it was great defending from the guy," Cole said. "I had my celebration ready but it wasn't to be."

Both managers made several substitutions but Ireland looked dangerous on the break and England should have snatched the winner six minutes from time, Forde doing well to smother Alex Oxlade-Chamberlain's shot with the goal at the winger's mercy.

"I have reason to be happy with the way we played," Trapattoni said.

"England had more possession but we knew this. England is one of the three or four strongest countries in the world. This draw for me is good. In 90 minutes the result is right."

Trapattoni was delighted by the performances of his younger players, singling out Long, Coleman and James McCarthy.

"They needed this experience and they will learn from it," the