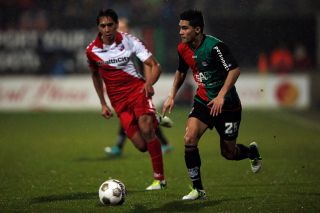 Anton Janssen's men went into game rock bottom of the table, but finally gave their fans something to cheer about with a confident performance.

Higdon proved to be the hero for the Nijmegen club, putting the hosts in command before Hakim Ziyech pulled one back for Marco van Basten's side late on.

And seven minutes into the second half, NEC's lead was doubled as Higdon pounced again to convert Soren Rieks' delivery.

Higdon's goals looked to have secured the points, but Ziyech frayed the home fans' nerves when the scored his first goal of the season.

The 20-year-old attacker found the net in spectacular fashion, curling a free-kick in off the crossbar five minutes from time to give the visitors hope of a dramatic comeback.

However, those hopes were dashed as NEC clung on to condemn Heerenveen to only their third defeat of the season.