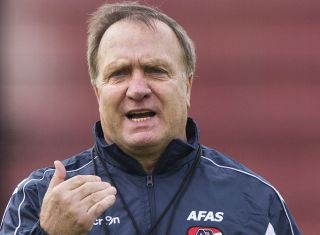 The Eredivisie is wide open as only three points separate the top nine clubs heading into the weekend's fixtures, with AZ, Twente and Ajax level at the top on 19 points from the opening 11 games.

Only one team in the whole division – Roda JC - is unbeaten in the last five league matches, further highlighting how the league is extremely competitive so far in 2013-14.

Dick Advocaat's AZ were the only side to win in the top eight last weekend and will hope to replicate that form against a team they have not lost to since 2009.

Leaders Twente were beaten 3-2 by Den Haag last time out, but remain top on goal difference after Ajax were held to a 0-0 draw against rock-bottom RKC Waalwijk.

Michel Jansen's Twente welcome NEC on Saturday looking to put a two-game winless run behind them, but their opponents will be in high spirits after picking up their first win of the season.

That victory – over Heerenveen – moved NEC off the bottom of the table and brought them back in touch with fellow strugglers Utrecht and Den Haag.

Pressure is beginning to grow on PSV coach Phillip Cocu after their third league defeat of the season against Roda JC last weekend, a result that meant the club have now lost two consecutive Eredivisie matches for the first time since December 2012.

PSV welcome PEC Zwolle to the Philips Stadion and expect to have goalkeeper Przemyslaw Tyton available despite knocking himself unconscious in the defeat to Roda.

Only two points separate Groningen and Roda ahead of their clash at the Euroborg Stadium, while the club wedged in between them – Feyenoord – travel to Cambuur, who ended a run of four matches without a win against Utrecht.

Waalwijk's point against Ajax was their first since August, but it did not stop them falling to the foot of the table. Next up is a game with NAC Breda.