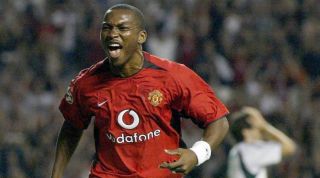 The former midfielder arrived at Old Trafford from Nantes in the summer of 2003, touted as an eventual successor to Roy Keane.

However, he failed to impress during 18 months at United before being sold to Aston Villa in January 2005 for £1.5 million.

The Cameroonian explained that although his time at United may not have gone as he hoped, it allowed him to fulfil a long-held ambition.

“I remember it was in 2002 when United started to look at me, and they took six-eight months watching me play,” he told AmericanGambler.com.

“Then at the end of the season I played in the Confederations Cup in France, and it was at that moment that I found out that United were looking at me. For me it was a dream – a dream come true.

“When I was a kid in Cameroon, the first shirt my dad bought me was a Cantona shirt with No.7 on the back and Sharp on the front. My nickname was Cantona because of the shirt!

Regarding the challenge of being seen as a long-term replacement for Keane, Djemba-Djemba said: “I was young coming from the league in France and back in the day it was not like the Premier League, which was the hardest-pressing league in the world.

“It was a lot of pressure – we’re talking about Roy Keane; the man, the captain, he was hard. It was difficult for me.

“I did my best and I played some good games, but it was hard for me. My team-mates helped me and Sir Alex Ferguson helped me. To be there was everything, and I have no regrets.

“Today I’m happy as I can look back as I won the FA Cup and the Charity Shield, and it's the trophies that people remember. If people recognise me around the world, it’s because I was part of that team.

“I have no regrets and I will never ever forget Sir Alex Ferguson because he changed my life. He took me from Nantes and brought me to England and everyone knows Djemba-Djemba because of him.”