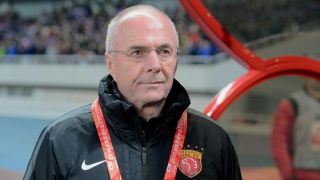 Sven-Goran Eriksson believes that China will become a "super power" and will have appeared in a World Cup semi-final or final within the next 15 years.

China are currently ranked 75th in the world, but in recent years the Chinese Super League has risen in prominence thanks to a flurry of high-profile signings.

The national team have qualified once for the World Cup, in 2002 when they lost all three group games.

Eriksson, who has had spells in charge of three clubs in China, believes that as the sport becomes more popular and the priority remains on football, the country's international team will continue to improve.

He told The Independent: "Ten years ago, maybe one or two in ten children will have kicked a ball. Now, since five years ago, the president says 'football in every school – the priority is football'.

"So, now every kid plays football. There's 1.3bn people, so if talented players don't come out from that I would be extremely surprised.

"In ten years' time, they will be a super power. In 15 years' time, China will play in the semi-final or the final of the World Cup.

"They invested a lot of money in coaches and big players. But what they're really doing is investing in grassroots football."