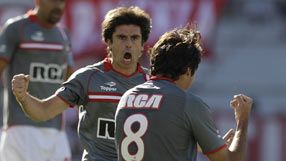 With three matches to go, second-placed Velez Sarsfield can close the gap to two points again when they play Tigre at home on Tuesday.

Estudiantes had to work hard top beat a lively Independiente side with many reserves as coach Antonio Mohamed keeps his leading players fresh for the Copa Sudamericana final, first leg on Wednesday.

Captain Juan Sebastian Veron recognised Estudiantes are not playing well and made a comparison with the Clausura championship which they let slip in May when they were a better side.

"It's the opposite of the last championship when we were playing well but lost it in the run-in. Now, not playing so well, we got a very important result to keep putting pressure (on Velez)," he told reporters.

Forward Juan Pereyra put Estudiantes ahead in the sixth minute when he steered the ball in from the left after a poor clearance by the home defence.

Independiente equalised less than 30 seconds after the interval with a shot that went in off the bar from midfielder Nico Martinez, whose brother Juan Manuel Martinez of Velez is joint top scorer in the championship with a tally of eight.

With the match seemingly petering out into a draw, Fernandez rose to a cross from the right and steered a looping header into the top far corner.

Estudiantes winger Enzo Perez, one of their best players this season, made a rash challenge in stoppage-time and was sent off.

Third-placed Arsenal, eight points behind Estudiantes, came from a goal down to beat San Lorenzo 2-1 at home on Friday.