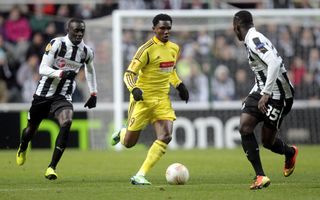 After his brazen pursuit of Rooney, Chelsea manager Jose Mourinho's concession that the chase was finally over, came after his side's UEFA Super Cup defeat to Bayern Munich on Friday.

Chelsea have brought in eight players since last season, including the dual capture from Anzhi Makhachkala of Willian and Eto'o.

"It's the end. We have a good group," Mourinho said.

"I feel everyone has the right to show his life, his future and I respect that."

The Portuguese made no secret of his desire to lure Rooney to London, goading the former Everton prodigee as recently as Monday, on a day Rooney starred for United in a goalless draw at Old Trafford, ironically, against Mourinho's Chelsea.

Chelsea had two bids turned down and with a third imminent, Mourinho took the step of inciting Rooney to publicly declare whether he favoured a move.

However, with Eto'o's capture from Anzhi Makhachkala complete, Chelsea's spending appears complete after an outlay of around €65million during the European summer transfer window.

"Samuel will give us other kind of qualities in attack," Mourinho said of his latest signing.