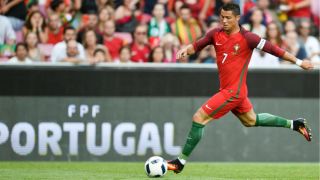 Ronaldo will be 33 by the time World Cup 2018 kicks off in Russia, assuming Portugal qualify, leading many to believe it's now or never for the Real Madrid superstar.

But Santos, speaking ahead of his team's Group F opener against Iceland in Saint-Etienne on Tuesday, places little interest in a player's age.

He said: "Ronaldo is great, he's highly motivated. He was motivated when he got here from winning the Champions League with Madrid and that has grown.

"We all have the same ambition. I don't think it's his last chance, he still has a few years ahead of him. We are all here regardless of how old we are – 18 or 38.

"In some ways, we are all thinking this is our last opportunity so that we give everything on the pitch."

Santos claims he's not yet sure how he will deploy Ronaldo against Lars Lagerback's men, adding: "3-4-3, 4-3-3 or 4-4-2, we don't know what's going to happen. [Germany's Mario] Gotze doesn't look like a traditional striker and he was their striker [against Ukraine on Saturday].

"Ronaldo scores 50 goals a season and he's not technically a striker."

Santos also found time to defend centre-half Bruno Alves over suggestions, reportedly from the Iceland camp, that he is a 'dirty player', following his dismissal against England in a pre-tournament friendly at Wembley for a head-high challenge on Harry Kane.

He said: "I've known Bruno for many years, I coached him in Greece and Portugal before that. He does everything he can but he's played 85 times for the national team and has one red card.

"I've seen players with fewer games get more red cards. When you look at the statistics you know he's not a violent player."

On paper, Portugal should ease past Iceland but Santos is expecting a close encounter.

"We are playing a good team, the coach is excellent and knows exactly what he wants," he said.

"It will be a well-balanced match. It will be difficult but we will try to be as creative as possible and I think we can win this match.

"Every match in these Euros will be balanced because third place can still qualify and this will make the games a lot tighter."