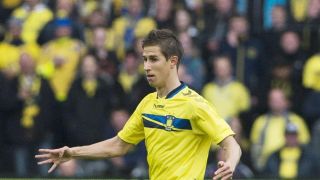 Brondby were the standout winners in the UEFA Europa League first qualifying round first leg as they thumped Juvenes/Dogana of San Marino 9-0.

Johan Elmander got the Swedish club up and running with a sixth-minute opener and his first-half brace would be matched by a double from substitute Elbasan Rashani in the second period.

Patrick Da Silva, Teemu Pukki, Frederik Holst, Johan Larsson and Rezan Corlu were also on target in a romp that only Slovan Bratislava came close to matching, with a 6-0 win at Europa FC of Gibraltar.

Premier League team West Ham eased to a 3-0 triumph over Lusitans of Andorra thanks to a brace from Diafra Sakho and a second-half header by captain James Tomkins.

Two days after winning the UEFA European Under-21 Championship with Sweden, Patrik Carlgren hobbled out of his return to club action against VPS Vaasa with AIK due to a knee problem.

Carlgren's team-mates were grateful for a Nabil Bahoui double that salvaged a 2-2 draw after Admir Catovic and Jordan Seabrook put the Finnish outfit two goals ahead.

Norwegian teams Odds BK and Stromsgodset IF were 3-0 and 3-1 victors at FC Sheriff and at home to FK Partizani respectively, while Lithuanian club FK Trakai celebrated their European debut with a 3-0 win over HB Torshavn of the Faroe Islands.

Welsh Cup winners Newtown AFC secured a last-gasp 2-1 win over Valletta thanks to Jason Oswell’s 91st minute strike. The Maltese side had captain Ian Azzopardi sent off, while their counterparts Birkirkara shared a goalless draw with Ulisses FC.

It was an underwhelming night on the road for Scottish Premiership duo St Johnstone and Aberdeen, who lost 1-0 and drew 1-1 at European debutants Alashkert FC and Shkendija respectively.

Crvena Zvezda, European champions in 1991, look set to fall at the first stage after goals from Gerard Gohou and Yermek Kuantayev gave Kazakh team Kairat Almaty a 2-0 win in Serbia.

Playing in Europe despite their relegation from the Eredivisie, Go Ahead Eagles secured a 1-1 draw at home to Ferencvaros.

There was an impressive 4-1 win for MSK Zilina at Belfast side Glentoran, whose city rivals Linfield beat NSI Runavik 2-0.

Lokomotiva Zagreb won 3-1 at Airbus UK and FK Spartaks Jurmala did the same at Buducnost Podgorica, with an identical scoreline separating hosts Differdange 03 against Bala Town of Wales, who finished the match in Luxembourg with 10 men due to Mike Hayes' red card.

Nomme Kalju, Jagiellonia, Slask Wroclaw, FK Cukaricki, Randers FC, FH Hafnarfjordur and Koper were 1-0 winners away, while Dinamo Batumi, UCD and Flora did likewise on their own patch.

FC Shirak, FK Kukesi, Dinamo Tbilisi and Skonto Riga were on target twice in home wins, although the latter two shipped an away goal to FK Qabala and St Patrick's Athletic respectively.