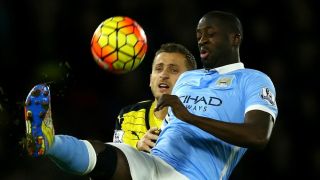 Manchester City defender Bacary Sagna has called on his team-mates to follow Yaya Toure's lead as they prepare to face Everton in the first leg of their League Cup semi-final on Wednesday.

The two Premier League teams meet at Goodison Park as they bid to win the right to face either Stoke City or Liverpool in the final at Wembley in February.

City's away form – which had seen them win only two of their last nine matches on the road in all competitions - had become a serious concern prior to a morale-boosting 2-1 win over Watford on Saturday that was sparked by Toure's impressive equaliser.

Sagna feels the in-form midfielder is showing his team the way in the absence of regular captain Vincent Kompany - who continues to struggle with a calf problem – after scoring three times in his last four matches.

"He is a very important player for us," the former Arsenal defender said of Toure. "He is our captain while Kompany is away and he scored a great goal – he also scored against Sunderland and Arsenal.

"Of course he will get criticism because two seasons ago he scored 20 to 25 goals and people are expecting him to do the same but he is very important in our system.

"He cannot be on top and score in every single game but he did it at Watford and has been doing that in the last few games.

"Yaya has been very important to the team, and we all trust him. He is also one of the leaders in the team. We have a few – Vincent is one, as are Joe [Hart] and Yaya, but we all have to step up."

Goalkeeper Hart, meanwhile, wants City to build on the Watford victory in what he knows is a hugely important Cup clash.

"I think we are in a good place," he told the club's official website.

"We have got a big cup game to come now this week. Even though we are not where we want to be, we are close and have got to build on the win."

City won the League Cup for a third time in 2014 when goals from Toure, Samir Nasri and Jesus Navas gave them a 3-1 victory in the final over Sunderland, while Everton have never won the tournament and last made the final in 1984.

Everton have only won one of their last six matches going into the clash with City, but manager Roberto Martinez felt he saw a big improvement in their 1-1 home draw with Tottenham on Sunday.

He told Sky Sports: "As you saw against Tottenham we are ready to have a really strong second half of the season.

"The way we defended was a really good platform. Overall the performance, particularly from a defensive point of view - which has cost us a lot of points in the last few games - was terrific."

Manuel Pellegrini's men will be hopeful of building a first-leg lead, having won two and drawn one of their last three games at Goodison, including a 2-0 league victory in August.

Two Belgium internationals have impressed in the competition to help their teams to the final four, with Kevin De Bruyne scoring four times for City and Romelu Lukaku netting three goals for Everton.

Martinez revealed defender Phil Jagielka (knee) is not fit enough to start the match despite returning to the substitutes' bench against Spurs, while Fabian Delph (knee) is a doubt for City.