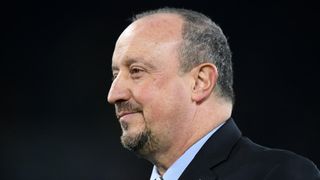 Despite Matt Ritchie's contender for the miss of the season, Newcastle moved up to 13th in the table thanks to Ben Mee's own goal and a Ciaran Clark header.

Newcastle made a dreadful start to the season but can now look up, although Benitez will ensure his side keep their feet on the ground.

"Every game for us is like a final," Benitez said to BBC Sport.

"Winning is massive because it gives us more confidence. There is still a long race ahead but we are doing well and hopefully we can continue that.

"We needed to win and to perform well. The players did it and were amazing in terms of effort, organisation and team spirit.

"We were working in the week trying to manage Burnley's two big centre-forwards and the players did really well.

"The main thing for us is to make sure we can get something out of these games. We have confidence now and the players will continue pushing and working hard."

The scenes at full time after a third straight victory! November 26, 2018

A fourth home defeat of the Premier League season leaves Burnley still a point and a place above the relegation zone.

But Burnley boss Sean Dyche felt his team played well at times against Newcastle despite falling 2-0 down in the first 23 minutes, with the Clarets' goalscorer Sam Vokes heading over a chance to equalise deep into second-half injury time.

"There was an unlucky goal and then a poor goal," Dyche, whose side have conceded 15 times in five games, told Sky Sports.

"A lot of aspects of our performance I was pleased with - we mixed our play and we created chances but the margins are small.

"On balance we probably deserved something but once you give those goals away it's difficult at 2-0 down in the Premier League. The mentality was excellent but obviously I'm very frustrated with the result.

"We had to stretch their back five, which we attempted to do in the second half. There were some moments of really good play so looking beyond the result then we're starting to come back to what we think we can be.

"There is a process at the moment with the team getting stronger. We are starting to look like what we can be but we've got to get on the right side of those margins.

"That takes work, mental toughness - which we have - and resilience. We've had to fight for everything we've got so far and we'll continue to do that."