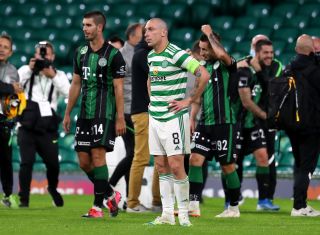 Celtic skipper Scott Brown insists any wantaway players should still be giving their all while they are at Parkhead.

After crashing out of the Champions League with a 2-1 home defeat to Hungarian outfit Ferencvaros in the second qualifier on Wednesday night, manager Neil Lennon revealed some of his squad have been looking for a way out.

Brown was surprised to hear that news but stressed the need for commitment.

The 35-year-old midfielder said: “For me the lads want to be here.

“I don’t know what people have said to him individually to be perfectly honest.

“But at the end of the day, it doesn’t matter if they want to be here or not, once they go on that park, everyone gives 100 per cent, that’s what the gaffer demands.

“It wasn’t the best performance, we dominated the ball but we have not been clinical enough in front of goal and we were a little bit sloppy with the two goals.”

Asked if he hoped any unhappy players would speak to him about their situation, Brown said: “Yeah, definitely.

“I hope everyone wants to be here. For me, it is fantastic club.

“There is a lot of lads who love this club that want to see us winning games, that have been here throughout, winning trophies, winning trebles and we know the feeling and it means so much to us.

“But for now, if people don’t want to be here, it’s hard.

“But it’s not up to me whether they stay or not, that is (for) the manager and the board and that’s a discussion with the players that don’t want to be here.”

Celtic drop down to the Europa League but next up is a home Premiership game against Motherwell on Sunday where Brown hopes the Hoops get back on track in their quest for 10 titles in a row.

He said: “It’s all about how we bounce back, we know what we are going to get in the papers for the next couple of days

“We’ve been in this situation before and it’s not nice and we don’t want the situation.

“We are out of the Champions League and it is not what we wanted.

“Now we need to focus on Motherwell which is huge, every single league game for us is huge this season, as well as every other season.

“But it is about the mentality of the whole squad and we need to make sure that we look back at this game and learn.

“We owe the fans a performance on Sunday.”