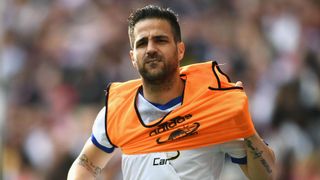 Cesc Fabregas believes he has proven his class at Chelsea despite being left out of Antonio Conte's FA Cup final XI, but refused to rule out a move away from the club in the future.

The ex-Arsenal man, who impressed en route to Chelsea's Premier League title triumph, was a second-half substitute against his former side as the 10-man Blues were beaten 2-1 at Wembley on Saturday.

And while Fabregas took no issue with Conte over the decision to instead opt for Nemanja Matic in midfield – and hopes to fight for his place at Stamford Bridge – he would not be drawn into a definitive answer on his long-term future following links to several top clubs.

"It is between [Conte] and me [what he said]," Fabregas told reporters after the final. "I am not upset and I have nothing against Antonio. He has done a fantastic job.

"I think I have a very good relationship with him. He has been honest with me and me with him. I understand his idea of football very, very well. I like it a lot.

"Every player wants to play more. This is in the genes of a winner. I am one of them and I will never put my head down or hands down. I want to fight.

Winning is not something, winning is EVERYTHING! May 21, 2017

"[I'm] not necessarily [wanting to leave Chelsea], but, in football, you can never say never. Everything can happen.

"I feel loved by the fans here. Every time I have played, I have shown I can play at the top level in this team, by far. It is all about trying to change the manager's decision, but he wants what's best for the team."

Although Fabregas conceded the defeat left a "bad taste" at the end of the season, he reflected on a successful campaign.

"But we would prefer to win the Premier League to the FA Cup, so it is still a good season."