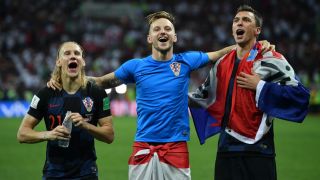 The smallest country since 1950 to feature in international football's showpiece occasion meet favourites France at the Luzhniki Stadium in Moscow on Sunday.

While Didier Deschamps' Les Bleus are widely tipped to take the trophy back to Paris, Croatia hope the weight of non-partisan support might help reap the ultimate prize at what is already their most successful tournament.

The team's official Twitter account shared 10 reasons to get behind Zlatko Dalic's underdogs, including the nation's high number of organ donors, the achievements of former Wimbledon champion Goran Ivanisevic, and gender equality within the Croatian Football Federation.

Not to mention the quality of their renowned playing kit.

We have the most beautiful and iconic shirt in the world. FACT. Apologies to , and other pretenders. July 15, 2018

Croatia's chances of springing an upset rest heavily on the shoulders of captain and Real Madrid maestro Luka Modric, who is among the leading contenders to win the Golden Ball.

They will be forced to battle through the exhaustion of consecutive extra-time victories, having needed penalties to see off Denmark and hosts Russia in the last 16 and the quarters, and a further 120 minutes to beat England in the semi-finals.