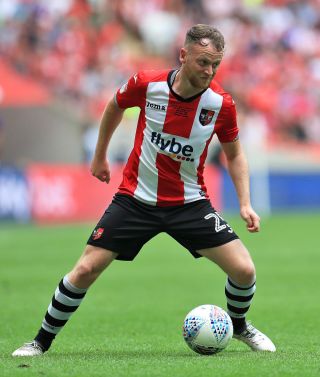 Exeter are likely to be without two key players as they look to get their Sky Bet League Two promotion challenge back on track when Stevenage visit St James Park on Saturday.

Goalkeeper Jonny Maxted sustained a side/stomach strain in the warm-up of last weekend’s 2-1 defeat at leaders Swindon, with the club awaiting the results of a scan that will determine his length of time on the sidelines.

Maxted’s absence means Lewis Ward, who joined the Grecians on a season-long loan deal from Reading at the start of the season, will again step in as replacement for a City side that has suffered back-to-back defeats to push them out of the automatic promotion places.

Captain Jake Taylor was forced off after 18 minutes of the game at the County Ground with an ankle injury, and although the swelling has since eased, he is a major doubt for boss Matt Taylor.

Rock-bottom Stevenage, beaten 3-0 at Exeter last month in the Football League Trophy, could have three new faces on show for the trip to Devon.

Boss Graham Westley brought in a trio of players on transfer deadline day, none of whom were in a position to make their debut in last weekend’s 3-0 home loss to Leyton Orient.

Westley signed defender Patrick Reading on a permanent deal from Middlesbrough, along with midfielder Canice Carroll and striker Ben Folami on loan deals until the end of the season from Brentford and Ipswich respectively.

Another new signing in Dan Kemp, who joined on loan from West Ham, could make his first start after coming on as a substitute and playing the final half-hour against the O’s.