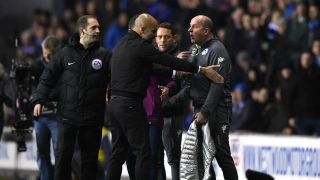 Manchester City and Wigan Athletic have been charged for failing to control their players during the Latics' fiery 1-0 FA Cup win on Monday, the Football Association (FA) has confirmed.

Referee Anthony Taylor looked as though he was set to book Delph, before he subsequently brandished a straight red as Wigan players surrounded the City man and match official.

Things then escalated on the touchline, as Pep Guardiola and Wigan coach Paul Cook exchanged words, with their argument continuing into the tunnel.

Cook and Guardiola were eventually separated, but the conduct of the players has landed both clubs in trouble.

An FA statement read: "Both Wigan Athletic and Manchester City have been charged for failing to control their players in relation to the dismissal of Fabian Delph during last night's [Monday] Emirates FA Cup fifth round tie. The clubs have until 6pm [GMT] on Friday 23 February 2018 to respond."

That was not the only flash point on the day, as a pitch invasion from Wigan supporters at full-time saw Sergio Aguero become embroiled in an altercation.

Although the striker will escape punishment for his part in it, the FA have asked both clubs for their "observations" of the crowd trouble.

Its statement continued: "In addition, both clubs have been asked to provide their observations following the crowd trouble at the end of the game and have until Monday 26 February 2018 to respond."